Irene Bell was born in 1939 in Consett, Durham County, and started her nurse training in 1957 at Shotley Bridge Community Hospital. Once on the wards, she quickly understood how reliant the patients were on nursing staff. She became a staff nurse on an orthopaedic ward, later progressing to ward sister. She went on to complete her nursery nurse course, and describes her work with special needs children and her role as a health visitor assistant. As part of the health promotion team, she became involved in sexual health. Irene was a HIV/AIDS coordinator for County Durham throughout the 1990s, working to promote sexual health and awareness of HIV/AIDS in the community until her retirement in 2000. 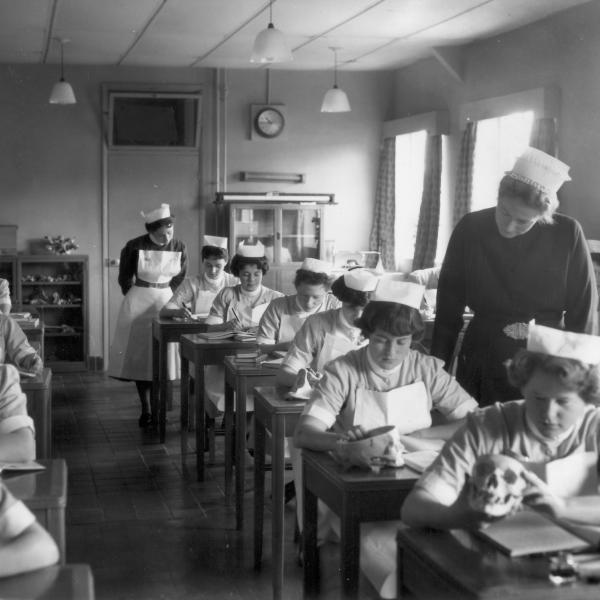 Listen to Irene Bell talk about her early nurse training, nurse hierarchies and the matrons who ruled the wards.

Click here to listen to Irene's interview in full in the Archive.

Interviewer: So in your first year, you said most of it was classroom based. What did you feel like the first time you went onto a ward?

Interviewee: Oh, pretty–as I say, I think I spent most of the time diving into the sluice when faced with a problem. But it was, yes, it was getting to know–getting to realise–that these people in these beds were reliant on you. So, after a while, it became apparent if they want something, I’ve got to do it. I’ve got to do it.

Interviewer: Can you remember what the wards were like?

Interviewee: Yeah. The wards, long wards, at Shotley Bridge Hospital, so we had the huts. In Shotley Bridge, post war there was a lot of plastic surgery going on there. It was quite a renowned place for plastic surgery. But the huts were just huts on the hillside [?] and wards on other side. And they were just long wards and a line of beds on each side. And we had one male nurse–male charge nurse–who would religiously get down on his hands and knees every morning and make sure the wheels of the beds were all in line. And heaven help you if they weren’t! And the maids used to bumper the wards. And the maids in those days ruled the wards. They absolutely did. You didn’t stand in the kitchen and have a cup of tea. That wasn’t allowed. The maids ruled the wards.

Interviewer: What was ‘bumper’ the wards?

Interviewee: Ah, ‘bumper’! It was a big mop, but it was a heavy–like a big heavy duster. And you went like that [demonstrates]–the maids, not us–to polish the ward floors. That was the ‘bumper’.

Interviewer: Was there a lot of hierarchy on the ward?

Interviewee: Oh, yes. Oh, sister was top-notch. Yeah. Sister didn’t do much–the one I’m thinking about–didn’t do much on the wards. She spent most of the time in the office. What she did I don’t know. But when she poked her head out of the office, people either ran or just hid. [Laughs]